Quarantine has kept price growth in Ukraine: what price will rise by the fall

Ukraine remains a record low inflation – according to the state service statistics for the six months rose by 2% compared to December 2020. But many goods and services rose and fell by tens of percent. Why did this happen and what would be the change in prices in the third quarter of this year, found the website Today.

What has changed in June

Prices for alcoholic beverages and cigarettes increased by 0.5%, due to higher prices of tobacco products by 1.1%.

The decline in June, tariffs for housing, water, electricity, gas and other fuels 0.4% was due to cheaper natural gas by 4.3%. Higher prices for transport by 1.2% primarily due to the increase of travel by rail 6.1%, fuel 2.1%.

See also:
Too slow rising prices: inflation in Ukraine was below expectations

But June trends could not overcome the tendencies observed until five months. First of all it concerns fruits and vegetables. On them more since the beginning of the year prices rose: fruit – to a record 50.4 percent, for vegetables – by 9.5%. Rising prices for the rest of the most expensive products are modest – the sugar rose in price by 5.4%, bakery products – by 5.1%. The rise of “bad habits” also by 5.1% due to planned excise tax increase. 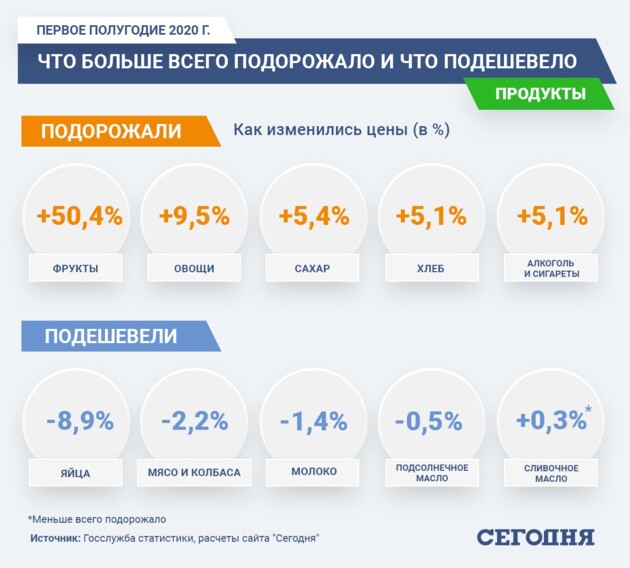 Fruits in June last year the average cost was a third less than it is now. Primarily due to the cheap cherries and strawberries, the prices of which now rolls over: due to poor harvest caused by frosts and rains, in the middle of the season cherries cost 90-100 UAH/kg, strawberry – 70-90 UAH/kg.

The biggest surprise this year has been a significant decline in prices for energy carriers: natural gas and petroleum products. Gas since the beginning of this year fell by 40.2%, as compared to June 2019 – 52.2% of gasoline and diesel fuel – by 21.5% and 26.5%, respectively. 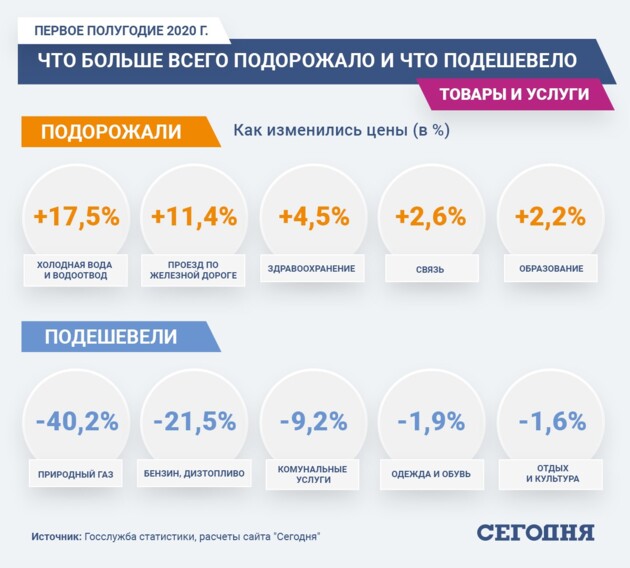 This automatically led to lower prices for utilities as a whole – 9.2 per cent this year and 12.2% compared to June last year. But it fell only heating and hot water – 13% since the beginning of the year and 12.5% for the year. And only for those consumers who do enterprise of zhilkommunenergo use natural gas. From CHP and boilers, coal-fired service is not cheaper.

Continue to drop the prices of clothing and footwear: 6 months – 1.9% for the year – 4%. But, according to experts, we are talking about last year’s collections and cheap consumer goods, fashion and branded items, on the contrary, has risen. Also reduced rates for recreation and culture: for 6 months – by 1.6%, for the year to 2.9%.

It was consistently more expensive cold water and drainage: on average 17.5% YTD and by 22% by June 2019. Has risen since the beginning of the year by 11.4% travel by rail, the increase in ticket prices year – on-year to just 4.9 percent. It is understandable that the fares depend on the season – in winter they are lower than in summer, in high season.

Although three months ago experts predicted a significant rise in prices from April, 3 to 5 percent for the quarter, it was much less for the second quarter rose an average of 1.3%. As explained to us, the member of the Economic discussion club Oleg Pendzin, major adjustments to the forecasts made coronavirus: the epidemic and subsequent quarantine decreased the consumption of goods and services, which restrained the growth of inflation.

“This year is not typical compared to previous ones – never before in all the years of independence, Ukraine has not introduced a total quarantine, which greatly slowed down all economic processes in the country, analyzes Oleg Pendzin. Consumption has fallen, hence the low prices. But he’s so average, because, for example, fruit has risen by half, natural gas prices have fallen more than 40%, prices fell on communal services, partially trimmed in the budget of the consumer the rising cost of food basket”.

The head of the National Council of economic development Alexey Doroshenko added that inflation is kept still and rigid monetary policy of the National Bank, which the whole neighborhood kept the hryvnia devaluation against the dollar.

“When money in the economy is not enough, it inhibits the growth of prices, – explained Alexey Doroshenko. – The second factor is food prices grew slightly from us due to the fact that the cheaper products in the world. We have this reduction was statistically offset by higher prices of fruits due to weather conditions. But the main role in the slowdown in inflation has made the pandemic and quarantine. When people lose their jobs when their income falls, then consumption is reduced, prices do not grow or grow more slowly. Your contribution to “the refutation of the predictions” made and a significant reduction of energy prices due to the cessation of air travel in connection with the quarantine demand for fuel and then oil has fallen significantly”.

Experts say that in the third quarter, inflation will accelerate, and the traditional year of zero growth in prices, not to mention their decline, it is hardly expected.

“In September can get cheaper apples as they expected a good harvest, prices may fall by half versus current – predicts Alexey Doroshenko. But the money is still going to be very expensive – 24-26 UAH per kilo of Ukrainian apples. Will be seasonal decline in prices of tomatoes, onions and other vegetables, but as it turns out, while it is difficult to predict. But the decline in prices for utilities, primarily gas, will change their growth. As preparation begins for the new heating season, and demand for gas in the world will grow. Overall inflation for July-September will be 1-1,5%”.

Oleg Pendzin more pessimistic in their forecasts. In his opinion, the winter is expected to significantly higher gas prices for households and utilities – at the level of import parity. This means that the cost of heating and hot water will increase significantly.

“There will not be compensatory mechanisms for the population, they are not contained in the new Memorandum of cooperation with the IMF – says Oleg Pendzin. – The rapid growth of prices for agricultural products is expected in the next marketing year that begins Aug. The largest growth rates will be potatoes. Potato harvest we will have even less than last year, as many fields in Western Ukraine were killed by rains and floods. Cheap imports may not count. For example, Belarus introduced a potato in the list of prohibited export goods, along with garlic and onions”.

According to Oleg Penzin, it will accelerate inflation, already since July. By the end of the year it will reach the budgeted 9% annual price growth, and even exceed them. In the third quarter, price increases, he estimates, will be about 3%, which is much more normal for this quarter of 0.5-1% inflation.

What was this year’s “index of cherries” – see story “Today”: