MH17 disaster: found out for six years and when punished Russia

The international criminal court can consider the case of the crash of MH17. The basis for such a claim in the future may become the decision of the ECHR

Exactly six years ago, July 17 2014, Pro-Russian militants from SAM “Buk” shot down a passenger Boeing 777 Malaysian airlines flight MH17 in the sky over Ukraine uncontrolled Donbass. Killed 298 people. For five years the international investigation team (JIT) comprising representatives of the Netherlands, Malaysia, Australia, Belgium and Ukraine to collect evidence. In June last year the public Prosecutor’s office declared suspicion four individuals. They face 30 years to life. But the investigators, prosecutors and judges say the list of suspects could widen. The main question is whether to prosecute the top political and military leadership of Russia? The website “Today” has collected the main facts about the MH17 – what you need to know six years after the tragedy. 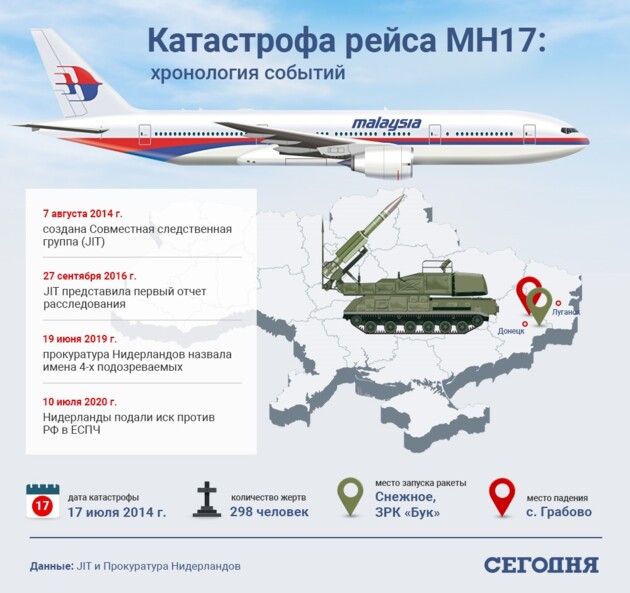 The tragedy occurred on July 17, 2014. The plane crash claimed the lives of 298: 283 passengers and 15 crew members. Already on 7 August 2014 set up a joint investigation team (JIT), which found that Boeing 777 Malaysian airlines was shot down by a missile from a Russian Buk missile system, which belonged to 53rd Kursk brigade of air defence of the armed forces. Pro-Russian militants have taken “Buk” in the area near uncontrollable Ukraine Pervomaysky (Donetsk region). Later JIT said location “Buck” – non-government-controlled Snizhne (Donetsk region). The crash of the plane near uncontrollable Ukraine village of Grabovo (Donetsk region).

The findings of the JIT and version of RF

An international investigation team continues to investigate. The first report presented 27 Sep 2016 (see infographic), announced with photos, videos, and recordings of interceptions of telephone conversations exact location of the rocket launch and the path of transportation of the Russian air defense system “Buk” brigade in Kursk. The report’s authors found that the start was made from the area near the village of Snow, which was under the control of Pro-Russian militants.

Russia its involvement in disaster categorically denies. Moreover, for all six years in Moscow came up with a variety of fake reasons, ranging from the attempted assassination on Board of Vladimir Putin and ending the conspiracy theories about the control of the Ukrainian intelligence services the American CIA. The website “Today” described the fake version of the Russians in the article “TOP 10 fakes of Russia on the MH17 disaster: the explosion on Board before the bribery Manager”.

The court and the accused

Most of the victims (196 people) were citizens of the Netherlands, Amsterdam so decided to hold the trial under the national, not international law. In September 2016, from the JIT was a list of one hundred suspects, who gave her Bellingcat group (specializiruetsya for investigations in war zones. – Ed.) repeatedly published reports about the crash of MH17.

In the first criminal proceedings, which on March 9, 2020 considers the District court of the Hague, featured four accused who are directly involved in transporting Russian “Buk” on the territory of Ukraine, three Russians and one Ukrainian former so-called “defense Minister” of “DNR” Igor Girkin (Shooters), major-General Sergey Dubinsky, Colonel Oleg Pulatov and Ukrainian Leonid Kharchenko.

Judges and relatives of the victims suggest that the trial will last for 4-5 years. In the article “What you need to know about the court on the MH17 in the Netherlands: a TOP 5 main questions and answers” website “Today” already wrote that if in the process of judicial review will be additional witnesses and facts that will help you to find new suspects, the court may decide to add them to the case or open a new criminal proceeding. However, the last version of the Dutch judges consider to be the most real, because the JIT investigation is still ongoing.

A lawsuit with the ECHR

In parallel with national judicial process in the District court of the Hague, the Netherlands has filed against Russia a lawsuit in the European court of human rights (ECHR). Thus, the Netherlands supported the relatives of the victims who have already filed their claims to the ECtHR against the Russian state.

According to the Ambassador of Ukraine in the Kingdom of Vsevolod Chentsova, the lawsuit is a violation of three articles of the European Convention on human rights: article 2, that no one may be intentionally deprived of life; article 3 on the prohibition of torture, inhuman or degrading treatment or punishment; and article 13 on the right to effective legal protection in the national body.

“Article 13 of the Netherlands referenced in connection with the improper level of cooperation of the Russian Federation in the investigation of the shooting down of the plane, contrary to its obligations under the European Convention on mutual assistance in criminal matters”, – said the Ambassador.

Do attract Russia to justice?

In an interview with “Today,” the Minister of foreign Affairs of Ukraine Dmytro Kuleba said that the Dutch justice will establish not only executors, but also the chain of command: who gave the orders and gave permission. But what about the accountability of Russian President Vladimir Putin and defense Minister Sergei Shoigu to speak – as long as they enjoyed international immunity.

Moreover, even in 2015, Russia has blocked the UN decision on the establishment of an international Tribunal. But this does not mean that the international criminal court cannot hear the case about the crash of MH17. The basis for such a claim in the future may become the decision of the ECHR in the cases of relatives of the victims and the claim of the state of the Netherlands against Russia.

We will remind, the correspondent of the website “Today” was present in the legal complex of the Amsterdam-Schiphol (Netherlands) in the first day of the trial on the crash of MH17: