Protests for the campaign: as the unrest in the United States affect the election of the President

Protest is in their interests to use the Republicans and Democrats, but there was a threat to the state USA

The presidential election campaign in the US continues in the background, which is not reduced for the second month of protests and riots. The killing by police of an African-American George Floyd has already led to dozens of deaths and thousands injured during the protests. In addition to the direct victims of the riots, there are others – as expected, a lot of people have contracted the coronavirus that is at stake.

Some US citizens protests cause more and more discontent. Others, frustrated by the reaction to what is happening politely, exhibit even greater activity.

As protests and riots have an impact on the campaign, whether they ultimately cause the cancellation of the elections, the site “Today” understood with the help of experts.

In favor of this version says also that fact that the protests by early July, began to decline.

“The situation with the protests in the country stabilized. The number of demonstrations and protests has declined. But the number of dead and wounded has rebounded strongly. In Chicago, for example, in one day injured 67 people. The same trends are observed in other cities of America. The increase in casualties is connected not so much by the protests, but with the fact that the police in these places either be disbanded or paralyzed, the situation is controlled by the radicals. In many cities the police refused to perform their duties, as for every use of force police officers may lose their job, be sued and go to jail, not to mention the fact that they can just lose a life,” – said in comments to the website “Today” history Professor at Bard College (USA) Gennady Sklarevski.

According to him, in the cities, where control of the streets took up the radicals, the police is virtually nonexistent.

“There is the domination of chaos and lawlessness, are expanding drug trafficking and prostitution. And with the growth of criminal activity begins the struggle for territory between different gangs that solve conflicts with weapons. In this situation most affected the civilian population, as the showdown are where people live mostly poor people. Because now is the black population in many localities asked to impose a state of emergency and call out the National guard,” – said Gennady Sklarevski.

From time to time the American authorities do resort to the help of the national guard. Did the state of Georgia, declaring the state of emergency and entering units of the national guard after the riots and the emergence of the victims in the independence Day. But in General, according to experts of the site “Today”, the reaction of the American establishment – both Republicans and Democrats – adjusted with an eye to the presidential elections.

“The reaction of the American establishment is hardly adequate. Most of them have publicly endorsed the main slogan of the protests – “Black lives matter”, but a slogan that really calls for inter-ethnic peace – “Every life has value!” – remained without attention of a large part of opinion leaders. On the one hand, it divides society, with the other mobilizes the electorate. So the protests will not stop until the election is completed. Tactically the protests will help Democrats to win elections, but strategically they have already started to destroy the foundations of American States – American historical narratives. These protests reduce to absurdity the fight against racism and inciting ethnic and racial hatred in American society,” – said in comments to the website “Today,” the head of public organization “Association of political science,” Dmitry Sinchenko.

According to Gennady Klareskog, protests, on the one hand, favorable to the Democrats, as they allow to mobilize the electorate. On the other – the negative attitude of Americans to the unrest could eventually play a cruel joke with a rating of Joe Biden.

“Continuing unrest is their only chance to win elections. But to win they need the support of independent and moderate, for which the radical left is unacceptable. So the Democrats fall right in between Scylla and Charybdis. For them, this situation could easily have ended in complete failure. A growing part of the population sees the Democratic party as the party that lays a threat to public order and security of citizens. Of course, that independent and moderates away from the Democrats,” says Gennady Sklarevski. 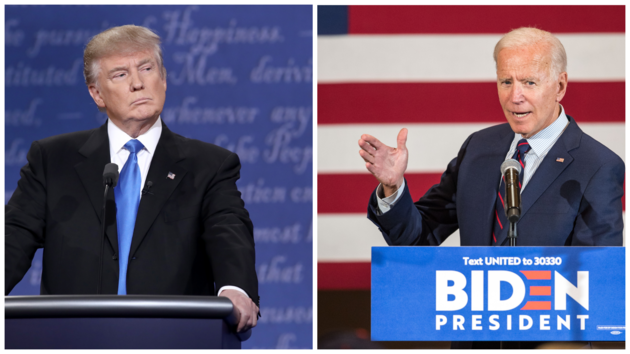 In turn, the Deputy Director of the Ukrainian research Institute of extremism Bogdan Petrenko notes that to use the situation to their advantage trying both major political parties of the United States.

“Protest in the US is likely to have long came to be there, if not for the election campaign. The acting President also took the position of leader of the nation, and the leader of his own electorate. And instead to negotiate with the protesters, to go on some concessions, he is playing to the mood of the electorate and sends a clear message about antizionist actions of protesters and the need to use force against them. In fact, it gives rise to a clear polarization of the electorate, both Republicans and Democrats. But encourages protesters to increased protests,” – said in comments to the website “Today” Bogdan Petrenko.

About left-wing extremists, Russia and China

The experts far from thinking that the protests are instigated or fueled by one or the other major political force in the United States. It is just about trying to wrap the uncontrolled process in their favor.

“Protests after the death 25 may of Floyd from the very beginning was spontaneous. Then seem completely out of control of both government and opposition. This usually happens with situations, which science calls “revolutionary”, – said in comments to the website “Today” leading researcher of the Institute of history of Ukraine of NAS of Ukraine Andriy Martynov.

“They rule” today on the streets of American cities, the radical left, said Gennady Sklarevski.

“The worsening situation and the growing unrest really only interested left-wing radicals. It is primarily the “anti-fascists” and “Black life is important” (JV). Revived also the organization of the Black Panthers. Among the radicals strong utilitaria mood. They are opposed to the elites in General, without specific differences between Republicans and Democrats, between the white population that supports trump and rich people from Hollywood who support the radicals. They smash all. What is their recent RAID on Rodeo drive, the most prestigious street in Los Angeles, where the famous boutiques. They destroyed and looted everything, leaving no stone unturned,” – said Gennady Sklarevski.

However, the escalation of tensions not only interested in American radicals. According to Bogdan Petrenko, there is interest and external forces. Who would like to see USA lost in their own problems and not leading the active work at the international level.

I agree with this opinion and Dmitry Zinchenko.

“If we talk about the external forces that are interested in the internal problems and instability within the US, of course, the ideological opponents of the United States – Russia and China. There is no doubt that the intelligence agencies of the two countries are already working on the streets of American cities,” – says the analyst.

They say that if the revolution cannot be controlled or lead, you should want to try to use it. The website “Today” already wrote that is better managed by the Democrats. A rating of Joe Biden shows a steady upward trend, while the ratings of President Donald trump almost froze. However, of course, this happens not only because of the protests – a much greater role was played by the economic crisis caused by a coronavirus.

However, experts are not sure that trend will continue. Moreover, under certain circumstances the situation will play in favor of trump.

“If the protests were accompanied by various kinds of excesses, it would clearly lead to a drop in the rating of trump. But the duration of the protest leads to its degradation. We are talking not only of looting but also about the extremes, which sometimes cover participants – for example, the fight against symbols of American state or the tyranny of that from time to time occurs in areas controlled by the protesters. For example, in the famous CHOP in Seattle (Organized (Occupation) protest on Capitol hill; eng. Capitol Hill Organized (or Occupied) Protest; the self-proclaimed autonomy. – Ed.), where, after a series of killings of police gave the nod to regain control over the territory. That is, the longer the protest the more aggressive and extreme forms it will acquire. If the protests began, relatively speaking, in August, then clearly it would be possible to speak of defeat trump in the election. And there are questions. Much will depend on the ability of Biden to pass a thin line between supporting ideas of the protesters and condemn their radical actions. In General we can say that the Democrats got the increase in ratings in the tactical dimension, Republicans, and high probability of positive private ratings in the long term,” says Bogdan Petrenko.

According to Andrey Martynov, yet the protest voters are consolidating around the trump under the slogan “law and order” and around the Biden – under the liberal slogans.

“The situation of public opinion in the United States is viewed strictly along party lines. Supporters of trump noted that riots happen in the States ruled by governors or mayors are Democrats. Many middle-class (regardless of racial identification) believe that the protests have gone too far. Technically, Biden is ahead. But this campaign is one of the most unpredictable in the political history of the USA”, – said Andrey Martynov.

The elections “will take place in any weather”

What the experts are unanimous about is the fact that the actual election protests do not threaten. At least not yet.

“To disrupt the elections can only be a state of emergency on the territory of the United States. But it can’t be done by only the President or one political force. In the Senate most Republicans. In the House of representatives – the Democrats. So the question is if it will be initiated by the President, the Senate may not even be reached. Therefore, this scenario seems unlikely,” – says Andrey Martynov.

According to Gennady Klareskog, “the upcoming election is too important for both sides and the few who supports the idea of transfer”.

Protests in the US are waves. As soon as it seems that everything starts to subside, there is a new reason for the resumption of stock: