Holidays abroad: how to travel on the sea in Croatia and why after Egypt need quarantine

The incidence rate in Ukraine is growing, and our statistics is not credible due to the insufficient number of tests

Despite bezviz, the EU remains closed to Ukrainians for four months because of a pandemic coronavirus. A week ago, Ukraine was not included in the short list of 15 third countries (does not include neither the EU nor the Schengen area) whose citizens are allowed entry into the European Union. The European Council will review the list on July 14. But the chances that bezviz we unlocked, is not enough. In Ukraine more than 60 cases per 100 thousand population, and you need less than 16. However, neither the Ukrainians, nor the airline is not stopping. Some boldly sell tickets, others buy and go. A vivid confirmation of the detention of Ukrainians in Athens, who have spent three days in the infirmary upon arrival. Yesterday all returned home safely. But confusion and chaos with the border crossing where you can go, and where not, is not removed. The website “Today” to understand, which countries for Ukrainians opened, which closed, which require a negative test for coronavirus and observation on arrival, and when, finally, will earn bezviz.

On Saturday evening, July 4, on arrival at Athens airport with flights of Ryanair and WizzAir 17 Ukrainian citizens refused entry and was placed in isolation at the airport. Monday, July 6, student Anna levkivs’ka, which was EN route to France, still missed. The others due to airlines yesterday sent home.

Ukrainian diplomats and consuls have made many efforts to detainees not deported with the inability subsequent entry for several years. The airline, which Ukrainians flew to Athens, didn’t check properly their documents. Passengers, despite the EU ban to enter the country, third-country nationals, still bought plane tickets and flew at your own risk. Distinguished, for its part, Greece a couple of weeks ago saying that let Ukrainian tourists, and then one message on the website of the Athens airport reversed its decision.

For detainees in Greece Ukrainians, this situation, fortunately, ended well. For the rest it should be a lesson that to ignore and try to evade the prohibitions is not necessary. Better to listen to the recommendations of the Ministry of foreign Affairs and the Ministry of health does not plan a trip abroad in the near future unless absolutely necessary. About this yesterday at the briefing were told the foreign Minister Dmitry Kuleba, Recalling that today, Ukrainians are open to 23 countries, but with limitations (see “What countries are open to Ukrainians”). 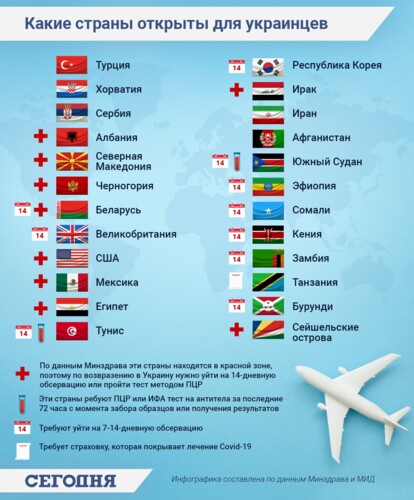 Infographic: “What countries are open to Ukrainians”

According to Dmitry Kuleba, to date, Ukraine does not meet EU criteria for getting into the “green” list of third countries whose citizens are allowed entry into the European Union. The website “Today” already wrote that, according to the decision of the European Council from 1 July to the Schengen area can enter the citizens of 15 States, including even China, hence pandemic. But not the Ukrainians.

According to the expert on international Affairs Natalia Ishchenko, to date, for the purpose of tourism Ukrainians from EU countries can go only in Croatia (but in the list of the foreign Ministry, which announced Kuleba, it is not, as in fact the check-in individually in each case allow the Ministry of interior of Croatia). This became possible due to the fact that, first, Croatia is not included in the Schengen area, and secondly, they equated tourism to trips that are of economic interest for the country. But before the trip, all travelers must obtain online confirmation by completing the form on the website of the Ministry of tourism of Croatia.

“That is convenient, Hungary authorizes the transit. Therefore, those who travel machines, you can come to Croatia via Hungary. But there is transit, which is called a humanitarian corridor, also have limitations. Tourists give the card, what gas stations they can refuel. That is, anywhere except the track, to visit not. But even in such circumstances, individual Ukrainian tourists and even groups happily went to Croatia and already a rest”, – told the “Today” Natalia Ishchenko.

Just yesterday Montenegro lifted for Ukrainians need to provide a negative test for COVID-19 at the entrance. However, according to our Ministry of health, Montenegro is included into the list of the countries of the “red” zone, where the number of cases is 72 people per 100 thousand population. Therefore, upon return, the Ukrainians will have to go on a 14-day visual observation under control of the mobile application “DJ in the home” or to be tested for coronavirus by PCR and to obtain a negative result. 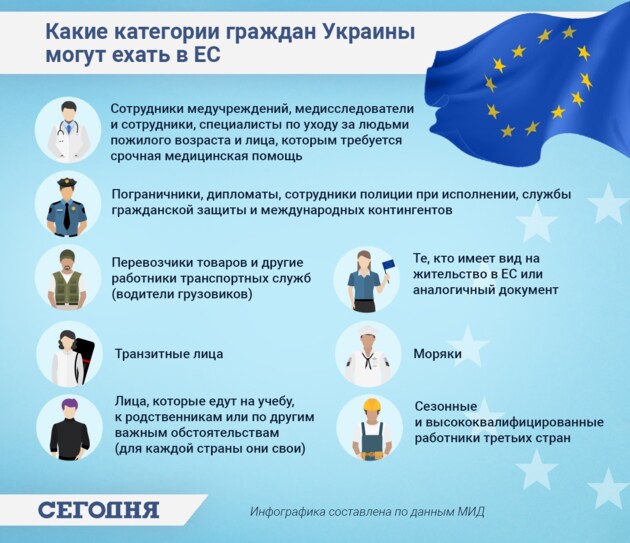 Infographic: “What categories of Ukrainian citizens can travel to EU”

The next revision of the “green” list of third countries whose nationals the European Council authorizes the entry into the EU, will be July 14. But the chances that there will be Ukraine, very little. According to the Executive Director of “Europe without barriers” Iryna Sushko, the incidence rate in Ukraine is growing, and our statistics, unfortunately, is not credible because of an insufficient number of tests and checks, so visa-free travel will be delayed, perhaps until the autumn. Besides, Iryna Sushko recalls: before the pandemic coronavirus experts said that in the classic form of a visa-free regime will acquire certain additional filters.

“But new for us the pandemic has not been removed such phenomena as terrorism and organized crime. From 2021, the EU was ready to implement a system of pre-authorisation to travel (online service ETIAS, where time for 3 years before travelling in the EU you need to get permission. – Ed.). Now the question is: will the EU because of the pandemic, to enter this system, or once again upgrade and start later? But I remembered that the world was ready to change the rules to ensure safety. And if earlier the concept of security of the EU is associated primarily with risks related to terrorism, organized crime, fight against money laundering, etc., now to this list was added by the pandemic. So expect that we will return to bezveze that we had with 2017, is unlikely”, – told the “Today” Irina Sushko.

Where to watch rules of entry

Almost a month works “Interactive world map” of the Ministry of foreign Affairs of Ukraine. There you can find all the information about the rules of entry and transit to any country in the world. Similar online platform has launched and the European Commission – Re-open EU.

It is also worth to constantly monitor the change of the list of “red” and “green” zones, which publishes the Ministry of health of Ukraine. For example, Albania allow Ukrainian tourists without any restrictions. But in Ukraine, Albania in the “red” zone, so the arrival – by 14-day observation under control of the application “DJ in the home” or to a negative analysis of coronavirus by PCR. The same applies to Egypt.

Also in the foreign Ministry, after the incident with the Ukrainians in Greece, it is recommended to follow six simple rules: to contact the airline, travel Agency or operator and to check the rules of entry; make sure that the insurance covers the infection with coronavirus; contact the Embassy or Consulate in the country of destination; to ensure the availability of funds in the event of an emergency; to take the necessary medications to you personally in the event of a forced delay for a border; to check the condition before you travel.

We will remind, on Tuesday, July 7, at the briefing, the foreign Minister Dmitry Kuleba told about the rules of entry into the EU: