Debts for communal: why the Ukrainians are overpaid bills

Ukrainians are better to pay bills on utilities, according to the latest data of the state service of statistics. And pay not only new accounts but expired for which there are debts. But how to understand the website “Today” to repay debts is much slower than it was a year ago, and for a number of services such as garbage collection, are rising. Why is this happening and what are the forecasts for payment to non-and new heating season, figured out the website Today.

For utilities, billions of hryvnia

As can be seen from the estimates of the state Statistics, in may this year Ukraine’s average population paid to 137.5% of the amounts billed in the invoices for communal services. Consumers repay the accumulated debt. This trend was observed in all regions and in Kiev. Money in may the Ukrainians paid 11.9 billion UAH for “water, gas and light”, and the accounts for may would be 8.7 billion UAH.

The best and worst

Although overpayment for communal was in all areas, but the credited amount differ significantly. For example, in Cherkasy region for gas in may, paid “four accounts”, and in Luhansk region – only “half account” (see infographic). 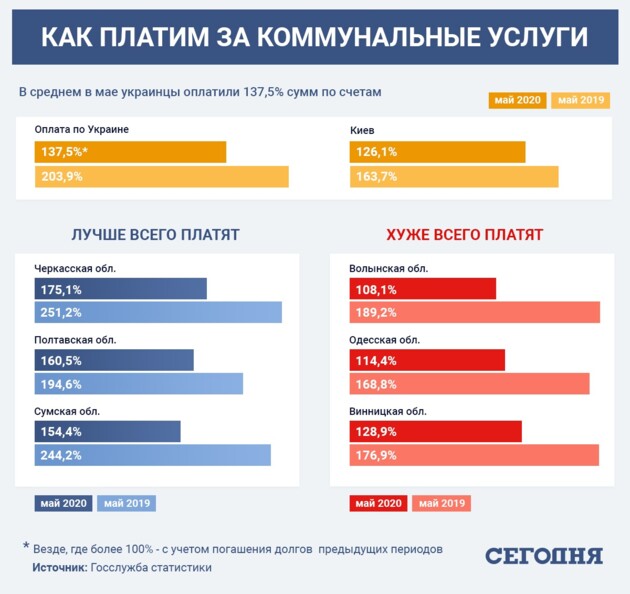 As you can see from the infographic, it is best to pay for communal services in Cherkasy, Poltava and Sumy oblasts, the worst – in the Volyn, Odesa and Vinnytsia. But even in the regions-outsiders consumers tend to pay the debts, all the calculation is over 100%. The capital was in the middle: the level of payments in may amounted to 126%, this is lower than in may 2019 (of 163, 7%).

See also:
Ukrainians are waiting for new penalties for debts for communal: what MPs

What you pay for, what should 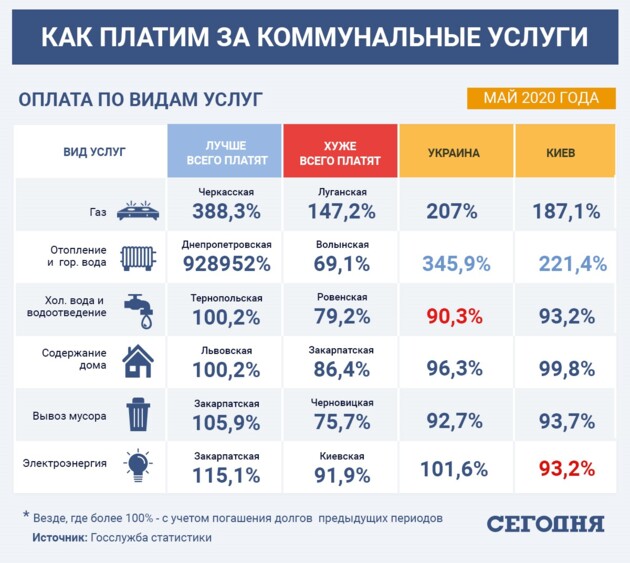 “The population in the first place pays for those services, which are easiest to lose if you have debt: is electricity and gas in the private sector, where it is used for heating of houses, – said the head of the Association of professional Directors of real estate of Ukraine Andriy Nikonchuk. – But everything else is paid possible. But the Cabinet at the time of quarantine was forbidden to deprive the population of all types of services for non-payment, accrue penalties and interest, the result is obvious”.

Service providers agree that the moratorium on disconnection of service affected the level of timely bill payment. But many companies find other ways.

“To maintain payment discipline, we help clients in three ways: reminders, creating new services for additional fees and energy efficient solutions. We remind and inform about the debt through SMS, Viber, email, paper-electricity bills, – said the head of communications YASNO Anton Kovalishin. – For quick payment create additional simplified online services to pay the person can perform in one minute without additional registration. To reduce your energy costs by up to 50%, our clients can avail energy efficient kit. It includes a two-band energy meter with service turnkey installation, smart socket and LED lamps.”

Where are the debts

Member of the Economic discussion club Oleg Pendzin says that from year to year repeats the same trend with the utilities: as soon as you start the heating season, the debts accumulated as soon as hoopston ends, the debts are reduced.

“Year after year the biggest underpayments have for three months – November, December and January, – says Oleg Pendzin. In November 2019 the population paid 48% of the amounts of the bills in December 2019 was paid 79% of the accounts in January 2020 was paid 83% of invoices. Since February-March, the debt, as a rule, gradually decrease, so it was in this year.”

“This means that current debts last year, will be paid over a long period, until October, the beginning of a new topstone” – analyzes Oleg Pendzin.

Andrew Nikonchuk makes these figures a clear conclusion: people are much slower to repay debts not because they don’t want to pay, but because I can’t.

“Well, because of the lower gas prices amount in the payment for heating and hot water has decreased, otherwise the debt is not reduced, and growing, – said Andrey Nikonchuk. But low dynamics of debt repayment is a direct result of falling incomes due to the epidemic of the coronavirus”.

According to experts, this year of such gradual repayment of debts on a communal flat, as previously, should not be expected. And the reason for that is quarantine, which, according to experts, lost work and income about 3.5 million people, more than 20% of the population.

“Serious problems will start with the new heating season, – says Oleg Pendzin. – Many families can not pay all the debts and remain without subsidies. Also now there are the state aid only to those who have expenses for komuslugi not exceed 15%, and 20% of revenues. But how to disable for the debts or to evict now impossible, and in older homes off heating and water to one person is technically impossible, people will simply stop paying, they are not much at risk. Is that risk to remain in the winter without heat and water”.

Andrew Nikonchuk predicts that the debts for utility services will increase in the next three months.

“When the quarantine will end, and you can disable services, especially gas and electricity, many debtors will begin to look for ways of payment, such as, debt restructuring. But fundamentally it will not change the situation,” – said Nikonchuk.

For utilities it is best to pay where the house is organized in condominiums. But if the chair will be thieving a possible detective story. For details, refer to the plot of “Today”: