After heavy rains that resulted in flooding in several Western areas, on the evening of 4 July in Cherkasy 40 minutes had almost half of the monthly norm of precipitation. About it reports the edition “Vicere”.

So, the city has registered to 31.4 mm of rainfall, or 41% of the monthly norm. The rain was accompanied by strong wind gusts and hail, the average diameter of hailstones in the airport area was 5 mm.

Local residents actively publish video to the bad weather in the middle:

In addition, because of the rain in the city has dropped the air temperature from +32 degrees to +19.5 degrees.

After the revelry of elements of the South-Western district, Kazbat, street Heroes of Dnepr, Gagarin, University and Tarasova, automotive circle of the plane was impounded.

The car literally floated on the road.

And so the situation looked in the private sector:

In addition, the downpour flooded a house on the street Rustavi. Water flowed directly from the roof:

Not spared the bad weather also Smila, and Chyhyryn Zolotonosha. In Zolotonosha, according to local media, in a short period of time, dropped 13 mm of rain and the hail 7 mm. Also the element was rampant in Vasyutyntsi:

Residents of the village published a photo of gradin: 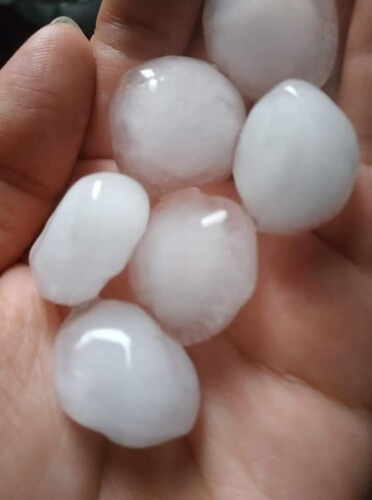 Recall that forecasters expect a sharp decrease in temperature in the next few days. Also note that June 2020 in Kiev entered the TOP 10 hottest for 140 years.

Meanwhile, in Zaporizhia region, the villagers remained in the heat without water: