The constitutional court on the inside with beautiful rooms, but without the three judges

On the eve of celebration of Constitution Day, the journalists of “Today,” visited KSU

On the eve of Constitution Day, which is celebrated in Ukraine on June 28, correspondent of “Today” went on tour in the building of the constitutional court, whose presidents sworn in presidents. We figured out how justice is done in the masks and how the lack of space in the premises can affect every Ukrainian, who appealed for help to this court. We will remind, the constitutional court – the country’s only organ, which guarantees the supremacy of the Constitution.

Among the cases considered by the SIC, for example, the constitutionality of the law “About the cleansing power”. 58 MPs recently sent a submission asking to reconsider the right of the President to appoint the head of the state Bureau of investigation. Early in the year, KSU cancelled the increase in the retirement age for workers in hazardous industries and declared unconstitutional the article of the responsibility for making a knowingly unjust decisions.

At the entrance to the building KSU, we are greeted by two guards who thoroughly inspect all the pockets in backpacks, please go through the frame metal detector, which “eliminates” the plaque on the strap and shows that other metal objects do not move. Only after this test we pass in a ten-story courthouse, which was built in the shape of open books.

By the way, a trip here may be recorded by anyone by filling out a special form on the official website of KSU. However, now here, like all other companies, comply with the quarantine and excursions unavailable. Also, using the contact information on the website, you can make an appointment to the leadership of the Secretariat and reception can be accessed without appointment. In General, the court employs about 300 people. 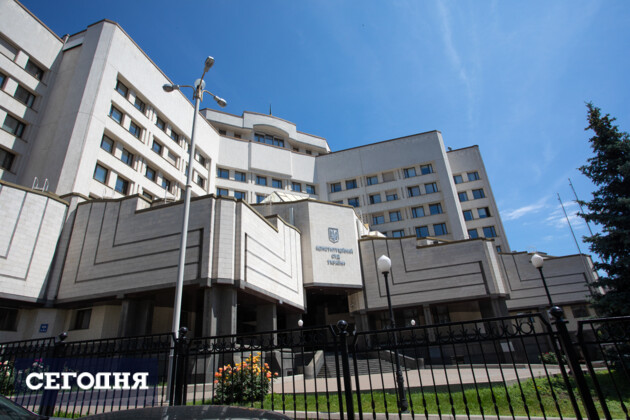 “The constitutional court of Ukraine appeared under the sign of Libra. So wrote the Ukrainian press, as it began its work on 16 October 1996, – says the chief specialist of Department of communications of the court and right monitoring Tatiana suprovich. – It was a landmark event in our country, because it is an independent body, separate from the other branches of government. It does not relate to the General system of the judicial system of Ukraine. But the work he began in this building and in one of the rooms Bankova street, near the present building of the Office of the President. There, the court has worked for 5 years. During these 57 months of the current building was built. It was designed as an open book.” One of the corridors of the LCP

Telling Tatiana soprovich showed in the Museum of the court us a rare photo. It shows a one-storey private houses, which was located here until 1980-ies.

Among the Museum’s exhibits, most of which are gifts from foreign Constitutional courts and international organizations, we noticed a gilded statue of a lion. 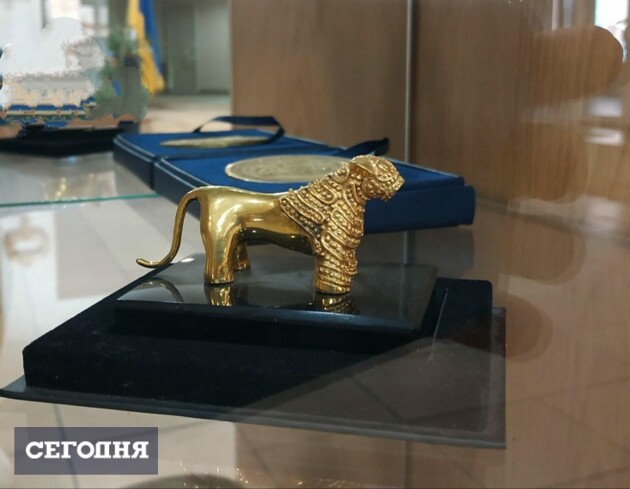 That same lion in the Museum of KSU

“This is a gift from Georgia. It dates from the 3rd Millennium BC and is the symbol of the National Bank of Georgia. We have his copy. Also among the exhibits there is a cornucopia with coins. It gave us the chamber, it symbolizes prosperity,” says suprovici.

See also:
Quiz: How well do you know the Constitution of Ukraine

Also among the exhibits there are sports trophies – in past years, representatives of the court and played football with his colleagues and has won a number of awards.

Judges of KSU distinguished from other mantle cherry color. Its color is set by the rules of court.

“The silhouette of the gown – trapezoidal, the hood, sleeves sewn with wide cuffs. The length of the gown must be such that the distance from the floor to the bottom was 19 cm”, – told us in court.

These rules are set so that when the meeting of judges of the lower edge of the mantle was at the same level.

See also:
As Zelensky wants to change the Constitution

The court also has a library which is considered one of the highest in the country among those with literature on legal issues. Here are about 20 thousand books.

After the Museum we headed to the hall where sits the Grand chamber of the constitutional court.

Here, in addition to meetings, the judges of the CCU take the oath. The roof of the hall is a huge glass dome, the total area of 350 sq. m. the Table at which sit the 18 judges, has a semicircular shape. 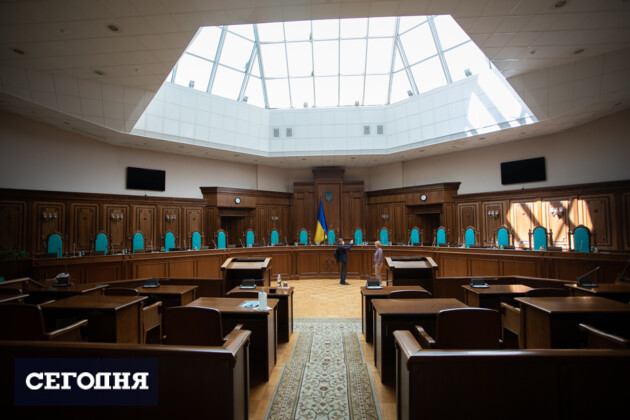 Hall of the Grand chamber of the LCP

“This is done for convenience to the judges it was obvious the participants, and participants – judges. In the center is a place for the head of the court, it differs in that the chair is the image of the scales,” says suprovici.

See also:
Free medicine, the right to housing: what provisions of the Constitution raise questions

Next, we pass in the hall, the seat of the Senate. In this room, examine a constitutional complaint.

“There are 9 judges,” says suprovici.

Whom take in the judges

“They may be citizens of Ukraine having the higher legal education, fluent in state language, having the experience in the legal field and aged at least 40 years” – told us in court.

“Two judges shall appoint the Parliament and one to the Congress of judges,” said the CCU. 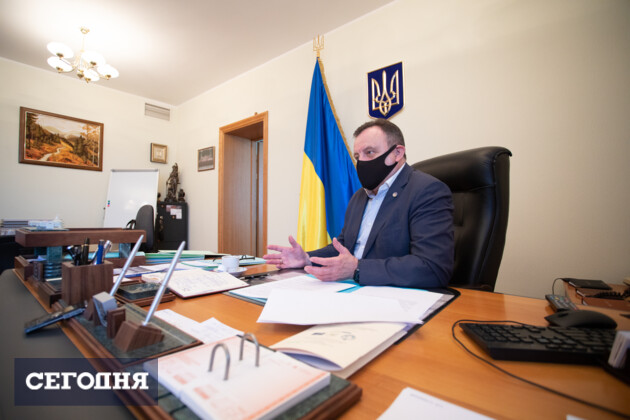 “We wondered how things could be serious. During quarantine, the court held, and holds meetings, and it requires the presence in workplaces of judges and employees of the Secretariat. But, for example, the work of the Secretariat was organised in shift mode. Some employees were in workplaces, part – remotely. Was analyzed the ability of each employee to come to work. At a time when public transport was working with restrictions, was organized Shuttle buses to and from work”, – said Victor Nikolaevich.

According to him, the wearing of masks and permanent treatment of hands with an antiseptic has become an integral part of life.

However, quarantine is not abolished the need of citizens to go to court. During this time, the calls became less only by 3%.

“In the period from 1 January to 23 June the court received 243 constitutional complaint. 122 of them were returned as those who did not meet the requirements of the law. Not all applicants know what requirements must be followed. The complaint was returned with explanation and stating that the entity may apply again, but subject to compliance with requirements,” says Beschastny.

As told to us in the CCU, during the period of quarantine was made 7 decisions, 3 of which – a Large house and 4 Senate KSU.

Unlike other courts, the CCU say they have no problems with envelopes for mailing of correspondence to participants of those or other processes.

“We would like a little different. Now, for example, inadequate premises for the work of the CCU. By the way, in considering the question of construction of some additional housing on 5-6 floors. We have no large Assembly hall, which would have included conferences, including international. But we can’t hold due to lack of space. We can’t hold them in the courtroom. It would be a violation! Not enough space to accommodate the employees of the Secretariat of the Court,” says Beschastny.

According to the lawyer, there is a need to expand for reception of citizens:

“We don’t have enough space for the library. Because of this, ordinary citizens are deprived of the opportunity to visit the reading rooms to increase their legal literacy. Additional housing would solve these problems. We have an archive, which has also required additional space. And some of the judges ‘ offices are so small that teaching materials are stacked in a high stack. But still need a place to work assistant referee and scientific Advisor”.

Also, as we found out in the near future in Ukraine there will be an unusual edition of the Constitution – to save money, it was decided to order the Constitution with nested inserts for subsequent changes.