Quarantine restrictions in Ukraine has not stopped the spread of coronavirus, but the introduction of adaptive model of quarantine allowed to unfreeze the domestic economy. To such conclusion analysts of the Center for economic strategy (TSES).

“The first results of transition to adaptive quarantine confirmed the validity of this model. Already in may with the easing of quarantine the restoration began, and by June people almost restored dekorativny level of movement”, – stated in the results of the study of TSES.

In may, the trade has almost recovered at last year’s level, the volume index of retail trade turnover compared to April amounted to 115%, compared to may 2019 – was 96.9%. The volume of payment for goods by Bank cards almost returned to the levels of February and in grocery chains – exceeded level of February by 23%.

“Even turnover in the segment of electronics and household appliances, which in April fell to 43% of pre-crisis level has already been resumed in full. Also fully recovered in the calculations of the network stations. In General, after the introduction of adaptive quarantine industrial output rose from 83% of 2019 level in April to 88% last year in may,” – experts say. 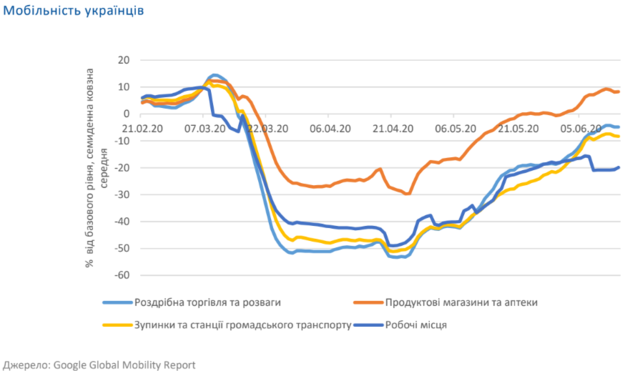 However, analysts point out that despite the mitigation of impact on the economy, there are still risks of a deepening crisis.

“Because of the constant threats of the return of the restrictions of a full-scale recovery of the affected sectors will not happen. Therefore, the government should introduce targeted support to those who suffered the most, while maintaining effective measures of adaptive quarantine in the future” – suggest economists.

According to experts, support from the state needs most is such categories:

We will remind, earlier the Prime Minister Denis Shmyhal said that total quarantine is more dangerous than the coronavirus. The head of government reminded that the epidemic shows the increase in the incidence, and not to get a wave of coronavirus, like in Spain or Italy, you need to take action. For example, actively penalize citizens and business for failure to comply with quarantine.

By the way, the Cabinet has developed a new plan of struggle against violators of the quarantine.