Ukrainians began to live better: how to change prices and wages for five years

Against the background of problems with the coronavirus, quarantine and declining incomes of a significant number of Ukrainians, the population is pleased that prices in the country almost do not grow. According to the state service statistics, in the “quarantine” spring all rose an average 1.9 percent, and many goods and services cheaper.

How have the prices of basic products, merchandise and services and will be with them in the summer, found the website Today.

Products – up, commodities down

State statistics estimated that in may, inflation was only 0.3%, it is much less than in March and April of 0.8%. And given the deflation in February (0.1 percent) since the beginning of the year prices increased by 1.8%. 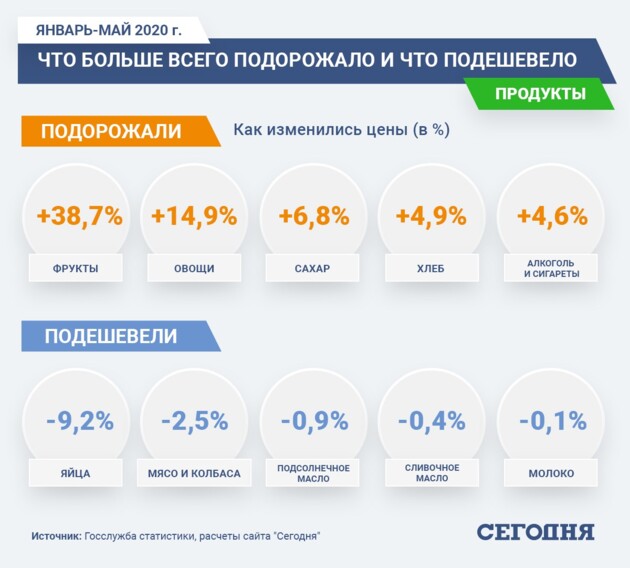 Of statistical data clearly reveal two opposite tendencies: on the products of the percentage price increase of some positions was much greater than the percentage reduction in price of other items, and manufactured goods and services – on the contrary. 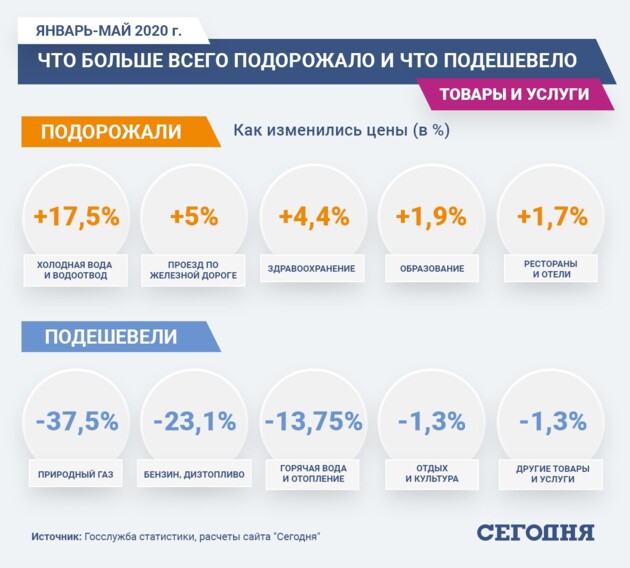 Has changed the cost of electricity for the population, which is not expensive over three years – the last price increase was in March 2017.

Prices and wages in 5 years

We also assessed how the increased average prices and average wages over the last 5 years – from may 2015 to may 2020 – to understand, was the average Ukrainian in the next five years richer or poorer.

38% increased cost of transport services, 59% of the cost of communications services.

Also there are two groups of positions for which prices are increased for 5 years much more or much less than the average inflation rate in the country. Out of competition – “bad habits”: due to annual growth of excise duties on alcohol and tobacco alcohol and cigarettes has risen in price for 5 years 2.2 times. 89% increase in the cost of education, 74% more than was the average check in restaurants.

Less all has risen in price for 5 years appliances, furniture and household utensils – by 19%, clothing and footwear – 20%, rest 22%.

And yet, according to statistics, the average salaries of Ukrainians grew much faster than prices! So, in may 2015 the average salary in the country amounted to UAH 4042 – less than the current minimum wage. But in April 2020 (data for may will be published on the days) the average salary increased to UAH 10430. That is have increased more than 2.5 times. It covers even the rise in prices of excise goods, not to mention the rest. It turns out that in five years the average Ukrainian has become much richer?

Experts: live better, but not much

According to economists, it is incorrect to compare directly the growth of prices for food, manufactured goods and services in line with wage growth. Indeed, in addition to price, each product or service has a specific weight (percentage) in the overall basket of costs.

Member of the Economic discussion club Oleg Pendzin recalled that about 80% of the income of the Ukrainians spend on food (50%), utilities (20%) and treatment (10%) and only 20% – for all other needs. Therefore, we cannot say that the standard of living have increased over 5 years by 2.5 times.

“It would be correct to compare the GDP per capita in the currency in different years, – explained Oleg Pendzin. In 2013, Ukraine had a GDP of 170 billion dollars. In 2015, GDP fell to $ 80 billion – more than twice. Four years, the country has overcome the consequences of the fall, and only in 2019, we again achieved GDP 168 billion, So the average Ukrainian in 2019 were as rich as in 2013. In 2020, the income of the average Ukrainian has fallen again. It is obvious that data on GDP for 2020 yet, but in 2015 the income of Ukrainians has fallen much more than in 2020, we can estimate that we now live on average better than five years ago.”

Oleg Pendzin also explained why different to raise prices. For example, for clothing and footwear, household appliances 19-22% in 5 years, and on education at 89%. According to him, the cost of holidays, clothes, shoes, household appliances we have is determined by two factors: the dollar, which in 2015 increased from 21 to 27 UAH/USD (28%), and public demand. And he, in contrast to the demand for food, quite moderate, after eating and all of them are cured, and regularly buys new clothes and goes on holiday abroad is not everyone.

Education has risen by almost half because virtually all of it was paid – the budget places is 10-15%, while five years ago there were at times more.

What will happen to prices in the summer

Economists say that higher prices for fruits and vegetables in the period from January to may is the seasonal factor. But this year due to cold spring and have a poor crop of strawberries and stone fruits, causing their prices through the roof and affect the overall appreciation of the fruit from the beginning of the year.

“For example, for this reason, the cherries are a third more expensive (current price 80-90 HR/kg) than a year ago, – says Oleg Pendzin. – But vegetables, despite the increase in prices compared with December, in comparison with may of last year, are cheaper, except potatoes. But it is difficult to predict how prices will change in the summer as it is unclear how long will the quarantine. (Until the quarantine was extended until July 31. – Ed.). Overall in June-August you can expect a traditionally low inflation, to 1% for three months.”

While inflation is less than 2% per annum, which is contrary to the predictions of the Cabinet, the national Bank, the world Bank, has counted the growth of prices in Ukraine for the year in the range of 9-12%. And even lower than the optimistic calculations of the IMF to 4.5%. The Minister of economy Alexey Petrashko has said that the Ukrainian economy “was in a catastrophic situation” due to the fact that inflation was significantly below forecasts.

The head of the Ukrainian Association of trade networks suppliers Oleksiy Doroshenko noted that in June will not eat berries, or to make stocks for the winter.

“This year is unique because of the weather, which considerably delayed the start of the season, – stated Oleksiy Doroshenko. – A real “summer” for consumers will begin in July and continue in August. But we should not rely on the cheapest food in the middle of the season. This peak may be short or it might not even be in some regions. For vegetables the situation has improved, but Ukraine still does not have enough of its own onions and potatoes. The main trend of the summer – we do not expect growth in food prices, which in March predicted the UN. But negative expectations concerning the continuation of the pandemic and the slow economic growth will not allow reduction in world food prices, including in Ukraine.”

To prevent the price increase for socially important products, as well as medical masks and other products, the Cabinet introduced them at regulated prices. For details, refer to the plot of “Today”: